If you’ve heard the phrase “no kill” but you aren’t sure what it means, you’re not alone. As it relates to companion animals, the phrase has more than one meaning and this has led to some confusion and some disagreement between people who feel strongly about helping animals. Some people have come to equate the phrase as being very literal (meaning that no animals are ever destroyed) and they accuse people who support no kill concepts of advocating institutionalized hoarding. Nothing could be further from the truth. No kill is not a definition; it is a culture in which life-saving is the ultimate goal and in which the only animals destroyed are those which are truly suffering or those dogs which are so aggressive that they cannot be rehabilitated (even by experts) and which present a genuine danger to the public.

There are essentially three types of animal shelters in the United States: 1) kill facilities; 2) no kill limited admission facilities; and 3) no kill open admission/managed admission facilities. Kill shelters are exactly what the name implies. The individuals operating the facilities, either with tax dollars or using private donations, destroy animals, many of which are healthy and treatable and are not suffering or aggressive. The people who destroy the animals are certified to do so but are rarely licensed veterinarians. Some shelters still use gas chambers to destroy animals (although the practice is the subject of pending legislation in a number of states). Limited admission no kill facilities are typically places where animals are not destroyed unless they are suffering or unless they are so aggressive that they cannot be rehabilitated (even by experts) and thus pose a risk to the general public. Open admission/managed admission no kill facilities operate using the same principles as limited admission facilities, but they do not turn away animals due to space or health condition. These facilities “openly admit” any companion animal in need of help. Some manage the admission in order to engage with people trying to surrender a pet towards trying to keep that pet in the existing home.

No kill is a sheltering philosophy which rejects the decades old idea that the best we can do for homeless animals in shelters is to adopt out a few animals and destroy the rest. Although most of us believe that the animals who die in shelters must be suffering or damaged in some way, that is rarely the case. It is quite common for shelters and humane societies to destroy animals who are healthy and treatable simply because it is what has been done for decades and because the shelter leadership has not embraced methods which can be used to stop the killing and which are being used in places across the country. Most people who work in kill facilities openly lament the killing and many genuinely believe they have no other choice. Their failure to educate themselves on viable options to the killing is their greatest failure, regardless of their best intentions.

There are many organizations which advocate the no kill philosophy using different methods and under different names. One of the most successful methods is the No Kill Equation which was developed by Nathan Winograd. The equation is dual-purpose in nature: it serves to keep animals from entering shelters in the first place and serves to  get animals out of the shelter quickly. What all methods have in common is a drastic reduction in the number of shelter deaths by involving the public in the life-saving process. In some locations, more than ninety percent of the animals who enter shelters are saved. This is in stark contrast to many shelters which routinely destroy from 50% to 90% of the animals entrusted to their care. 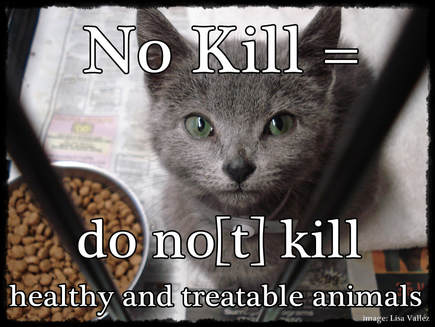